Grape Juice for Your Heart! 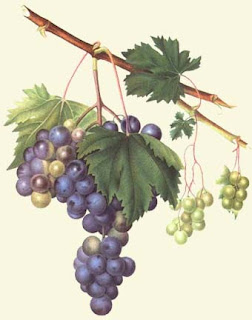 Concord grape juice contains high levels of flavonoids that have been shown to have antioxidant activity in the test tube. A study from the University of Texas compared the antioxidant power of concord grape juice to that of vitamin E and found both had similar antioxidant abilities within the body, specifically towards low density lipoprotein (LDL) also known as “bad cholesterol”. Oxidation of LDL is thought to be an early step in the formation of atherosclerosis.

A group of 36 patient volunteers participated in this study. To make sure all participants were on a standardized diet as far as dietary flavonoids were concerned, volunteers were first put on a low flavonoid diet for two weeks and remained on that diet for the duration of the study. After two weeks, volunteers were randomized to receive either 400 IU of alpha-tocopherol or 10 milliliters of concord grape juice per kilogram of body weight daily. This amounts to approximately 700 ml of grape juice per day for an average sized person or less than one quart (24 ounces). Since the authors of the study had already determined that 400 IU of vitamin E was enough to decrease LDL oxidation, they used that amount to compare with concord grape juice.

After two weeks of supplementation blood samples were taken for analysis. Both supplements were well absorbed which was demonstrated by significant increases in flavonoids in the blood of the grape juice group and significant increases in blood levels of vitamin E over baseline in the vitamin E group. Both groups showed significant decreases in the oxidation rate of LDL, by approximately 10%. This suggests a protective effect for both supplements in regards to atherosclerosis, something that has already been documented for vitamin E.

One draw back, patients supplemented with grape juice also increased their triglyceride level during the two-week study. The authors suggest that this was a transient effect that would not be important in healthy individuals but may be a concern with diabetic patients or patients with already high triglyceride levels.

Flavonoids found in grape juice include catechin, epicatechin, quercetin and anthocyanins. Some of these flavonoids are readily found in other fruits, vegetables and herbs as well. This is good news for those who don’t drink wine and yet want the antioxidant benefits associated with it. However, if you do drink wine, you can get these benefits from red wine as well.

A version of this article was previously published in Herbs for Health Magazine.
http://www.herbcompanion.com/health/natural-healing-improve-heart-health-with-concord-grapes.aspx

In general it is thought that high nutrition foods are better than supplements probably because they contain a wide variety of nutrients rather than one isolated in a supplement. With this being the season for thinking about what to grow come spring, perhaps grapes would be a good choice!
Posted by Cindy No comments:

Its been hard to post lately because of the busy time of year. We have had successful markets in Boulder, Longmont and Denver recently. The Colorado Proud Directory just added our farm. They also put out a gift guide. The publication 'Yellow Scene' had a mention of us for local products.
We are hoping to do markets in both Denver and Ft. Collins this winter. All this while still working on remodeling and updating our workshop space. The extreme cold weather has made some things difficult though so hopefully it will pass soon. Unfortunately, some of the rose geraniums I was getting ready to cut for facial steams have been nipped in the greenhouse. They will survive but need time to put on more greenery. We just added smaller sizes for our knuckle balm and our sole pleasure foot butter which have been well received and are thinking ahead to summer to make sure we are growing enough herbs for demand.

I'll leave you with a recipe for Snickerdoodle Cookies. My son made these this week to take to work. Its always nice to have something baking in the oven when its cold outside. I've added lavender buds to sugar cookies before, but I bet they would work well in these cookies too. Try about a tablespoon of dried lavender buds or dried lemon balm leaves. The herbal aroma is a reminder of summer. Take time to sit down with a cup of tea and a cookie near the fire.

Use hands to roll into small balls the size of walnuts. Roll in a mixture of 2 tablespoons sugar and 2 teaspoons cinnamon. Place 2" apart on greased cookie sheet. Bake until just beginning to brown on edges but still soft.
Temp: 400 degrees F
Time: about 8-10 min
Makes about 4 dozen cookies.
Posted by Cindy No comments: 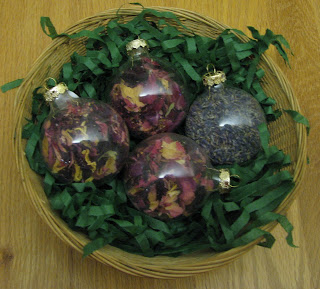 Herbs are full of aesthetic properties that include color, texture and fragrance. It is a joy to find different ways to use them. If you love using herbs you are in luck because Cory Trusty at Aquarian Bath is hosting a blog party this month based on Herbal Aesthetics. So after you spend some time here, go over there to see the other blogs participating in this topic.

I don't consider myself a 'crafty' person so crafts that I do have to be simple, so that is what you will find here. Two of my favorite herbs are rose and lavender. They have amazing fragrances as well as textures. Lavender flowers are tiny flowers that range in color from gray to dark blue. Roses start as small buds and then blossom into large petaled flowers with colors that include yellow, pink, and red. All summer long I dry as many roses and lavender stems as I can. With roses I dry both the whole flowers and the small buds. I look forward to spending time with these herbs in the winter after the growing season ends.

A small bowl of dried lavender and rose buds looks beautiful in a bathroom. A drop or two of essential oil can add to the pleasure. Because both of these herbs are also good skin care herbs I use crumbled rose petals and lavender buds in a number of skin care products such as bath salts and scrubs. I also distill both of them for their aromatic waters or hydrosols.

But the aesthetic project I will show you here is how to use them as a Christmas tree decoration. I purchase the very inexpensive, clear, empty, hard plastic ornaments and simply fill them with either lavender or rose petals or buds. It is an inexpensive yet beautiful way to use herbs and is a great winter reminder of the beauty of the garden. These last quite a few years and every year you can liven them up with a drop or two of essential oil dropped in the ornament. You can either hang these on your tree or simply put them in a bowl to view. Herbs that work well for this should be ones that retain their color and scent well and do not fall apart. Rosemary might be another herb that works well for this, although I've never tried it.