What is a Carcinogen?

I know cancer has probably touched everyone’s life (as it has mine) and prevention is certainly easier than a cure. I spent many years of my life studying cancer and the process of carcinogenesis and even have a few papers to show for it. The intense interest that the Campaign for Safe Cosmetics and Environmental Working Group have in banning carcinogens brings up the question as to what exactly is a carcinogen and how dangerous are they? Even though we of course want to protect ourselves as much as possible from cancer, it is not correct to think that anything that is a carcinogen causes cancer. Many of the damaging effects of carcinogens are actually countered by anticarcinogens that might occur side by side especially in fruits and vegetables. As a farmer and herbalist I need to speak up when someone says they want to ban all carcinogens.

Cancer is a little understood and complicated process that occurs in a multistep progression taking 20 years or more, which explains why it is more common as we age. It is a disease of cell growth. The normal mechanisms that stimulate and inhibit cell growth are changed in a way as to allow the cell to grow uncontrollably.

There are four definable phases of carcinogenesis (cancer development); initiation, promotion, progression and malignant conversion; each stage lasting years. Testing for carcinogens is just as complicated because different cellular changes occur during each stage.

The first stage, initiation, involves a change in the genetic makeup of a cell. This change can and does occur randomly or when a given chemical interacts with DNA causing a mutation in the genetic code. Chemicals that cause mutations are known as genotoxins. One important test done to determine if a chemical is a genotoxin is the Ames test. The Ames test, developed by Dr. Bruce Ames in the early 1970’s, is used because it is a rapid and fairly easy screen for DNA mutation. The test uses a single celled bacteria as the indicator organism; an already a mutated strain of Salmonella typhimurium. Chemicals being tested are incubated with the bacteria in petri dishes. If the bacteria shows growth in a certain selected media, then this is evidence of DNA mutation or genotoxicity and the chemical can be classified as a carcinogen.

What are some problems with this? Well, lets name just a few:
1. Bacterial cells and human cells are quite different. If you remember back to high school biology; bacteria are prokaryotes and human cells are eukaryotes.
2. Human organisms have enzymes that work to detoxify and eliminate mutagens before they can cause damage to the DNA. These enzymes are particularly prevalent in the liver and skin.
3. The nuclei of human cells have in place mechanisms for repairing DNA that is mutated; proofreading mechanisms.
4. For cancer to occur there must be more than one mutation occurring in the DNA. Mutations must occur in specific classes of genes that regulate cell growth (or death) and multiple mutations must occur over a period of many years.
5. When and if cancer cells develop as a result of multiple mutations, they express an antigen that is recognizable by the immune system so they can be removed and destroyed.
6. The doses used in the Ames test are very high doses that might never occur in humans.
7. As explained above, cancer requires multiple mutations in specific classes of genes before a cell actually transforms into a cancer cell; not just one mutation.

Everyone has mutated and transformed cells in our body at all times. When DNA becomes mutated, the cell first tries to correct that mutation. Because there are many genes that affect cell growth; those that speed up growth and those that inhibit growth, there are many safeguards in place to prevent a cell from growing uncontrollably and becoming cancer. If those safety mechanisms do fail there are mechanisms in place to cause death in a transformed cell. In other words, that one cell is sacrificed for the good of the entire organism. This process is called apoptosis.

Dr. Ames himself sought to ban many synthetic substances in the 70's because they were mutagenic in the Ames test. However, he later reversed his position saying that there is no scientific evidence that small doses of these synthetic chemicals cause human cancers. Part of his reversed opinion was the finding that many plants (fruits, vegetables, and herbs) also contain chemicals that are mutagenic. He said "There are over 1,000 natural chemicals in a cup of coffee, and only 22 have been tested. Of these, 17 are carcinogens."

Ames realized that regardless of whether chemicals are synthetic or naturally occuring they cause cancer when fed to laboratory animals at extremely high doses. He also found that this was a very politically incorrect conclusion. The environmentalist activists, Ames said "have a religion" that says that corporations are behind an exploding epidemic of cancer. This religion was promoted by handful of doctors (Samuel Epstein of the University of Illinois at Chicago), by a media looking for headlines, and by celebrity spokespeople such as Jane Fonda and Meryl Streep. "The idea that chemical companies are giving consumers cancer just isn’t true," he said. The main cause of cancer is old age. EPA allows for synthetic pesticides."

Dr. Ames also does not think that low levels of pesticide residues eaten by consumers are harmful. However, the amounts farmhands are exposed to are different and strict rules should be in place to reduce exposure for them and for chemical workers. With only 9% of Americans eating the amounts of fruits and vegetables they should the cost of eliminating synthetic pesticides would further decrease the amount of fruits and vegetables ingested. Since fruits and vegetables are one proven way to decrease cancer risks this would increase the risk of cancer. Dr. Ames is a well known and well respected scientist and even at the age of 82 he is still Professor of Biochemistry at UC Berkley doing nutrition and aging research.

For more information on the Ames test see:

Perhaps in another blog I will address other tests used to identify carcinogens.
Posted by Cindy 1 comment:

Top 10 things not to say 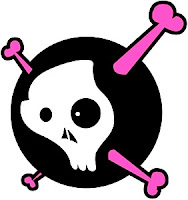 While people may not know what to say to you when you tell them about the Safe Cosmetics Act recently introduced to Congress (HR5786) and how it may affect your business, some people seem to forget to think before they speak.

People unaware of the Safe Cosmetics Act of 2010 may not understand what to say because they don’t know how it affects our business. Here is a list of the top 10 things not to say to small businesses who will affected by this bill if passed.

1. The Safe Cosmetics police will never come after you, you’re too small-fry. (Response: The lawyers may though.)
2. …but we need more laws to protect people.
3. Only Procter & Gamble needs to care about this law since it’s their fault.
4. Oh don’t worry, I’m sure they’ll fix it in time.
5. Don’t worry, it wasn’t intended for you.
6. You’re smart, you’ll figure out how to comply.
7. So sorry to hear you closed (accompanied by a tsk, tsk look that says, ‘then your products must have not been safe.)
8. But it will make our cosmetics safer. Why would you be against a bill that will make cosmetics safer?
9. Why not just do all the paperwork and be done with it.
10. This all the fault of the ______
Posted by Cindy 4 comments:

Email ThisBlogThis!Share to TwitterShare to FacebookShare to Pinterest
Labels: Campaign for Safe Cosmetics

Last week it was zucchini, this week its cucumbers! Don't you just love harvest time, basing dinner on what's growing in the garden? Although cucumbers are great for slicing and eating plain as well as putting on sandwiches, Maryanne decided to have a cucumber blog party. So here are some recipes from my favorite herbalists that you can try now while you've got plenty of cucumbers to harvest.

Gazpacho is also a great way to use cucumber as well as slicing them to put on cream cheese and bread. I've also distilled cucumbers, the distillate makes a great face spritzer especially when its hot. You can also use the distillate or hydrosol in various cosmetic products including toners and serums. Do you have a favorite way to use cucumbers?
Posted by Cindy No comments:

Award Winning Herbs at the Fair 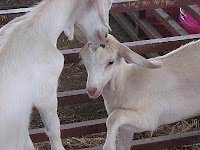 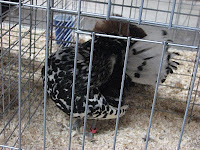 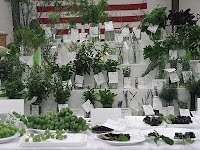 At the coaxing of a fellow farmer I went ahead and entered my herbs in the county fair this year for the first time. I am sure glad I did as I came away with 15 ribbons (including reserve champion for chocolate mint) and my husband and son also took away a few. Now I can tell my customers that my herbs are 'award winning herbs'!
I have always loved fairs and their historic importance. They celebrate agriculture and are a chance for people to come together to show their wares. Some county fairs are more extensive than others and the Boulder County Fair is just the right size with a small midway, several food vendors (including the 4H ice cream bar)and the typical animal, plant and project displays.

Although I take good care of my herbs all summer, the only special thing I did for the fair was to give them a good watering and trimming a week before the fair. There are categories for most culinary types of herbs as well as several 'other' classes. Requirements are to have 6 stems of each in a glass jar. Judging is based on condition, presentation, aroma and taste when appropriate. I realized after the fact that the Herb Society of America of which I am a member publishes a guide to showing/judging herbs. You can find that here.
Besides entering herbs in the fair, we also purchased a few chickens after the 4H judging. They seem to be settling in just fine.
Since I support agriculture county fairs are very important to me. Colorado has some good ones too including Adams County, Larimer County, and Elbert County (besides Boulder County). Jefferson county has more of a 4H day than a fair, but we were involved in that some when we lived in Lakewood. I hope that county fairs continue to do well in our country. If you have one in your county you can support it both by attending and by entering.
Posted by Cindy No comments: