Herbs for Halloween - What is in that bubbling cauldron? 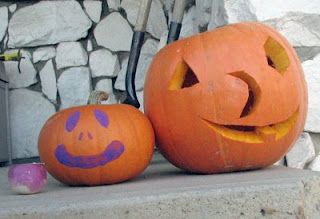 I grew the large pumpkin on the right, my neighbor gifted me the one on the left. Notice the small turnip on the left too.


I’ve always liked Halloween. Perhaps it’s because I like being someone I am not or because I am glad for the changing seasons and the tendency towards inward focus. As are most holidays, Halloween involves a blend of Christian and Pagan rituals. The Christian holiday is All Saints Day and All Souls Day when Christians celebrate and honor their dead. The Pagan holiday is Samhain or the Celtic Feast of the Dead and the Celtic new year. On Halloween night it is said the veil between the worlds of the living and dead is lifted and spirits are able to visit the earth. Because of this inherent danger many rituals have developed to protect oneself from any spirit that may mean harm. The foremost ritual being wearing a costume or camouflage of sorts so as to not be recognized.

My favorite herb of Halloween is Calendula or Mary’s Gold used to honor the Virgin Mary. It is a protective herb and is used in the Mexican tradition of Dia de los Muertos. Calendula with its bright, sunny appearance is placed either on a home altar or at the cemetery to help a deceased loved one find their way to living family members. Calendula also symbolizes grief that we may feel. Since Calendula is not native to Mexico, it is likely one of the Tagetes species was traditionally used as ‘marigold’.

Apples symbolize Halloween as they ripen this time of year. They are a symbol of love and fertility. It is said that the first girl to be able to bite an apple while bobbing would marry during the coming year.

Pumpkin is probably the most used symbol of Halloween. Although there are many stories about the jack-o’lantern the one I like goes like this:

Jack was a stingy, greedy man who was also fond of playing tricks on the devil. The devil’s revenge was to condemn Jack to walk the earth with only a lantern for light until Judgment day. In Ireland this lantern was made in a turnip, but the tradition changed to a pumpkin in the US because their larger size was more desirable. I grew turnips this year and might give the turnip lantern a try.

Many of the herbs were used during the Halloween season in the Middle Ages for protection and to cast away evil spirits. Among these are:
• Juniper which can be laid at the front door to deter witches and bad spirits.
• Rue, once called the “herb of grace of Sundays” was hung from doorways to ward off witches and spells. It was also used as protection from the plague during the Middle Ages. Branches of rue were sometimes used to sprinkle holy water in the Catholic Mass, now pine branch is the preferred method.
• St. John’s wort was hung at windows to keep evil spirits from entering the house.
• Rosemary, so called because it is the “Rose of Mary” was put over the cradle of babies for protection as well as under pillows.

Belladonna (Atropa belladonna) was said to be used as a ‘flying ointment’ by some. An extract of this herb absorbed through the skin gave the user a feeling of flying or astral projection. This herb however can be deadly and should not be used.

My Halloweens of the past 17 years have consisted of trick or treating with my children. I love trick or treating as it seems a good 'neighborhood' ritual; time to check in with neighbors for a short chat before everyone closes themselves in for the winter. I also typically have a fire in the grill and let the kids cook hot dogs (veggie dogs) over the fire. This is reminiscent of the ancient Celtic bonfires.
This may be the last year for trick or treat as my children are older so new traditions may arise next year; but bonfires are always fun!
Have a happy and safe Halloween.
Posted by Cindy No comments: 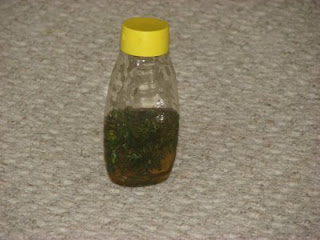 This time of year I am trying to get together the herb concoctions we need to treat various winter illnesses as they arise. One of these is thyme honey. This is easy to make and can be used to help remedy coughs and sore throats. To make this all you need to do is cut a good piece of thyme and put it into a jar of honey that has been heated slightly to soften it. Make sure all the plant material is covered or it can get moldy. I just leave it like this all winter and use as is. Of course someone who has more energy and time would remove the thyme from the honey after it has infused for a few weeks. Use this honey directly for a cough syrup (or diluted in a little water) or add to a tea. Thyme has traditionally been used to treat upper respiratory infections and does a good job.
Posted by Cindy No comments: 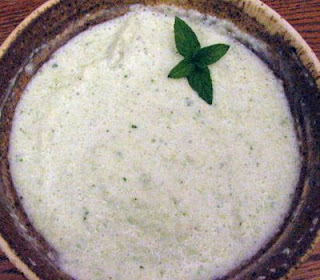 If you haven't had a frost yet and still have cucumbers, try this recipe for a cucumber spread often called tzatziki. You can vary the consistancy of the dish by how finely you grind the cucumbers or how much liquid you let drain out of the cucumbers.

3 cucumbers - peel and remove seeds (give the seeds to your chickens - they love them!)
2 cups of yogurt (low fat or high if you want)
3 garlic cloves
8 or so mint leaves
salt and pepper to taste

Chunk the cucumber, salt it and put it in a strainer to drain for 45 minutes to an hour. Put everything in a food processor bowl and pulse gradually to the desired consistency. Empty into a bowl. Serve as a sauce on veggie burgers, on pita bread, as a chip dip (low cal!), or eat straight with a spoon.

If however, your growing season has ended as ours has this week make sure to give all those bad cucumbers to your chickens. I cut mine in half longwise and they love picking out the seeds - same for your too big zucchinis.

Our nighttime temperatures this week will be in the 20s. My calendula however is hanging on nicely so I can still pick those flowers.
Posted by Cindy 2 comments:

The Harvest is In

We are expecting our first hard frost tonight and spent the weekend picking as much as we could from the garden; tomatoes, zucchini and cucumbers primarily. We had grilled vegetable sandwiches today and will continue to have grilled zucchini for some time. I was able to grow one large pumpkin which has made it to my front porch. All the pots of annuals and tenders are in the greenhouse, save for a few pots of mint that I brought inside. I do wish I'd picked some rhubarb to make some syrup from; but it might still be ok tomorrow. I've picked as many herbs as I can and they are now drying. The changing of the seasons is always a nice time and now with Halloween coming it is time to change the focus. Hope your harvest was great.
Posted by Cindy No comments: